La Cámara together with the Malaysian-Belgium Luxembourg Bussines Council (MBLBC) organized and Event and Networking with the Malaysian Investment Development Authority (MIDA) & Invest KL in the new facilities of MIDA in Kuala Lumpur. 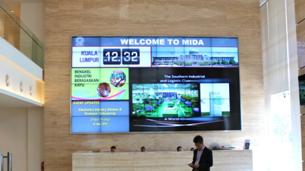 Image of the lobby of the new MIDA building

Image of the presentation of MIDA & Invest KL

Following the introductions of the Ambassadors, Mr. Phang Ah Tong, deputy CEO of MIDA, gave a presentation about the main duties of the Malaysian Investment Department Authority (MIDA) along with some representative facts of the economic environment in Malaysia.

MIDA’s mission is to promote foreign direct investment and manufacturing service; offer an evaluation about the manufacturing license, tax incentives or the duty exemptions. They also assist companies in the implementation and operation of their projects and facilitate exchange & co-ordination among institutions engaged in or connected with the industrial development.

Mr. Tim Saw, Director of Communication & Alliances of Invest KL then took the word to explain the functions of this organism.

Mandated by The Malaysian Government, Invest KL was created to attract and facilitate large global multinationals to set up their operational headquarters, International Procurement Centres, Regional Distribution Centres or Regional Shared Service in Greater Kuala Lumpur / Klang Valley (GKL/KV), and make it into one of the world’s top centers with world class businesses.

Before the Q&A time, Mr. Luis Ochoa, our Deputy Chairman and Mr. James de Caluwe, chairman of the MBLBC gave a briefing about both chambers mission in Malaysia and the relevance of this type of meetings.

The presentations were considered very interesting and the attendants asked several questions and suggestions to MIDA and Invest KL in order to achieve improvements for all parts.

The event was attended by significant number of members from both chambers and authorities of Malaysia, Spain and Belgium.

La Cámara wants to extend the gratitude to the Spanish Commercial Office for the coordination and support to this event.